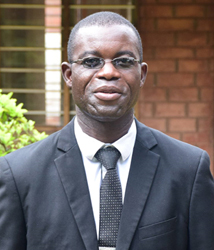 Mr. Safari Mbewe is an accomplished development management and global health professional with over 21 years’ work experience in development projects.

In his capacity as Executive Director, he provides strategic leadership to the Lighthouse, supervising both program and support operations. Having worked for both local and international institutions at Executive Management level in the Malawi HIV sector, Mr. Mbewe has vast experience in management of HIV programs. Building on what the Lighthouse has already accomplished, under his leadership, the Trust hopes to hone its strategic direction, grow and develop, as well as strengthen partnerships, and build new relationships.

Mr Mbewe has participated in high level workshops and conferences such as International AIDS Conferences (IAC), United Nations General Assembly Special Sessions on HIV and AIDS (UNGASS), International Conferences on AIDS and STIs in Africa (ICASA), the President’s Emergency Plan for AIDS Relief (PEPFAR) Country Operational Plan (COP) Reviews, and many other conferences, as a Speaker and Presenter.