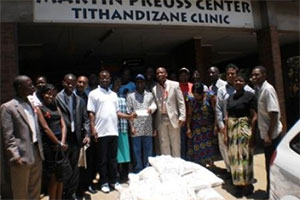 The board chairman of the Lighthouse Trust, Dr. Charles Mwansambo this year encouraged Manzoor Bheda to continue supporting the Lighthouse even though he is retiring as a Lighthouse board member.

Dr. Mwansambo said this as the board of trustees and Lighthouse staff were bidding official farewell to Manzoor Bheda, a renowned business man, who has been an effective board member of the Lighthouse since its inception.

In his speech Mwansambo commended Bheda for the contributions he has made so far and asked him to continue representing the Lighthouse in the business arena, “I would say that you are retired but not tired, we anticipate that you will continue being our ambassador in the business community” he said.

The board chair added that the fruits of Bheda’s presence in the business sector have already started showing as Mr. Haroon Sacranie, the Chairman of ZST Investment Limited has joined the board of trustees.

In response to the chairman’s call Bheda pledged to be available when needed “you have my undivided attention, I will help in whatever way possible” he said.

Bheda further said that he prides to have been associated with the Lighthouse, a local but on track organisation whose integrity, pivotal and singularity of purpose has made it achieve a lot in the years of its existence.

Mr. Manzoor Bheda is one of the Lighthouse trustees who took part as an executive member in the initial activities that led to the establishment of the Lighthouse Trust.
Lighthouse will remember Bheda for his passion in the institution’s reputation and growth. He was going an extra mile by providing personal finances to support income generating activities of Community Based Organisations working with the Lighthouse.